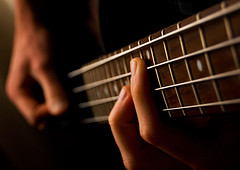 The bass guitar can be either acoustic or electric, and is a popular instrument in pop, rock and jazz music. The four strings on the bass guitar are tuned one octave lower that the lowest strings on a regular guitar. The bass’s low tenor is incredibly versatile, ranging from upbeat funk rhythms to moody and distorted rock riffs. The bass is an irreplaceable element of many contemporary musical groups.

The bass guitar is a relatively new member of the jazz music scene. 1930s and 1940s big band featured the double bass, and it wasn’t until the late 1950s that the electric bass guitar was used. In the later 60s and 70s, the electric bass became particularly popular in jazz-rock fusion groups.

Since the 1960s, most rock, pop, country and fusion groups have featured a bassist. The bass guitar grounds a musical composition, while enhancing the rhythm, establishing the beat, and setting the tone.

Depending on the music’s genre and style, a range of playing techniques are used – from the funky slapping to the unusual but evocative bass chords. The bass guitar’s unique role within popular music makes it a fun and rewarding instrument to play.