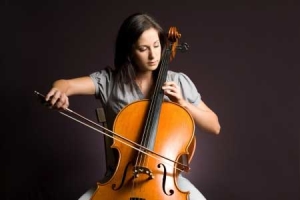 The violoncello, abbreviated to cello, is a string instrument larger than both the violin and viola, with thicker, heavier strings and a haunting, human-like tenor. The instrument’s intriguing lyrical tone ranges from bright, high registers to warm, low registers.

Cellos play an important role in the classical European orchestra, as the bass instrument in the string quartet. Most orchestras have around eight to twelve cellos, which play more than just bass. Cellos’ haunting tonal qualities make for a delightful harmony, and the unique human-like voice of the cello makes for intriguing solos.

Prior to the orchestra, the cello had prominent roles in operas and religious musical works during the baroque period.

Just like the violin, the cello is becoming more and more popular in mainstream music. From pop to folk and even rock, the cello adds a haunting atmosphere to any song. Although rarely part of a band’s line-up, it is not uncommon for musical groups to hire studio cellists.

The cello is a beautiful instrument, perfect for both group and solo performances.