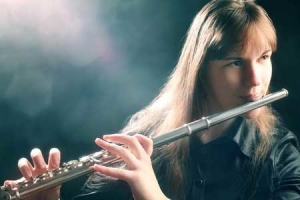 The flute is regarded as the oldest instrument, and flute-like instruments have been found dating back tens of thousands of years. The flute is part of the woodwind family, and is the only member that does not have a reed. Originally made from clay, stone or wood, the modern Western flute is made of gold or silver, and produces a magical, nuanced sound.

Orchestras usually have between two and four flutes, which play both in unison and separately. The flute is a relatively quiet instrument, so it’s main role in the orchestra is to create atmosphere and build excitement and drama.

Of the woodwind family, the flute has the highest pitch, and its unique tone is celebrated in a large repertoire of classical music. The flute’s sweet and mystic timbre blends wonderfully with most other instruments. In addition, many classical orchestras implement flute solos with great success.

Although flutes were seldom used in early jazz, big band and swing, modern jazz ensembles and soloists make full use of the instrument’s soft, lyrical voice. Because the flute is able to hold the melody, many jazz flutists play the same part as the saxophone.

While it is uncommon, the flute is featured in notable pop songs composed in the last 50s years or so. In popular music, the flute is used to create ambiance or to mirror the central melody.

The flute is a gorgeous instrument that is a true joy to play.