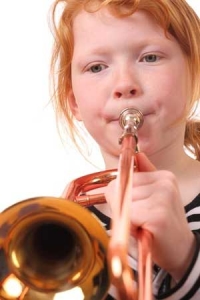 The trombone is the only instrument in the brass family that uses a telescope-like slide to change pitch, rather than valves. There are five common types of trombone – soprano, alto, tenor, bass, and contrabass – that all have individual roles in classical, orchestra and jazz music, and also as solo instruments. Although not as popular to play as the trumpet, the trombone is a dynamic, lively instrument with fantastic versatility and is an integral instrument in brass bands.

Although commonly used across Europe in the 15th Century, the trombone did not become a standard member of the orchestra until the 1700s. The instrument gained popularity in the 19th Century, and as orchestras grew larger, the bell size became wider to ensure the trombone could be heard.

In modern orchestras, there are often three trombones that play in the range similar to the bassoon and cello. The trombones usually play the harmony in unison. The exciting thing about the trombone is the slide. Moving fluidly between notes makes for some incredible sound effects that stand out in the orchestra.

Early jazz musicians embraced the unique trombone, which has become a staple for many traditional and modern jazz groups. Jazz bands of the early 1900s used the trombone to support the tuba in creating rhythm and harmony, over which the lead instruments would improvise. The Big Band era made full use of the trombones soulful sound, and it was during the 1920s that trombonists began playing solo as they do today.

Stand out from the crowd and have a go at the trombone!