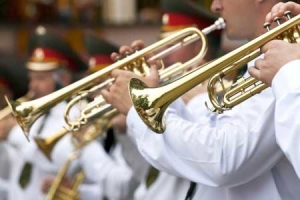 The trumpet is the smallest instrument in the brass family, and therefore has the highest register. From around 1500 BC, trumpets have been used to communicate messages over long distances, making it one of the oldest instruments. The modern brass trumpet has a cutting, vibrant voice, and is used mostly for musical purposes in classical orchestras, jazz ensembles and mainstream groups.

There are between two and four trumpets in an orchestra, and these contribute to both the harmony and melody in classical compositions. Because trumpets can be played very loudly, they are used to accentuate climactic moments in a musical piece. Trumpets can also produce sounds as delicate as an oboe, perfect for winding romantic melodies.

Prior to the 1800s, trumpets were quieter in sound and more difficult to play. The introduction of valves saw a huge increase in music composed for trumpets, and contemporary classical orchestras utilize the musical variety offered by the beloved trumpet.

The trumpet is the lead instrument in many traditional jazz ensembles. Its sound is dominating and loud enough to rise above most other instruments. It therefore holds the melody of the song, often through a technique popular in jazz called ‘flutter tonguing’.

‘Flutter tonguing’ is the technique of rolling the tongue when playing the trumpet, creating a similar sound to the pronunciation of the letter ‘R’ in a Spanish accent. Because the trumpet sound is created by the shape of the players lips and the notes pressed, there are many unique playing techniques to master.

The trumpet is an instrument that demands the attention of the audience, and so it is often used in popular music to add drama. The trumpet truly is irreplaceable, and is one on the few instruments played in almost every style of music, from country to rock, from pop to Latin and of course in brass bands.

What a striking instrument! The trumpet truly is one-of-a-kind.