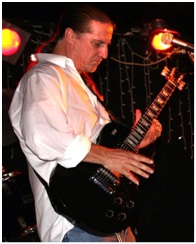 Want to witness rock and blues guitar music from some of the very best guitarists in the world, all in one place? Come along to Steve Flack’s Guitar Heroes live at the Brass Monkey in Cronulla.

Steve Flack, alongside guest guitarists Dom Turner from Backsliders, Dennis Wilson from Kahvas Jute, Brad Carr from Choirboys, and up-and-coming guitarist from the Liverpool Academy of Music Will Thackray, will perform incredible rock and blues composed by music legends such as Clapton, Hendrix, Page and more.

Backed by Steve’s own band – Michael Smith of Atlantics and Colin Burgess of Masters Apprentice and AC/DC – it’s sure to be an unforgettable night of inspiration for aspiring and experienced guitarists alike.

The project aims to pay tribute to blues and rock guitar legends of the 20th Century. Now on to it’s third volume, ‘Guitar Heroes’ has bought together some incredibly talented Australian musicians, including Pete Wells of Rose Tattoo, Ian Moss of Cold Chisel, Phil Emanuel, Phil Manning of Chain, Rick Fenn of 10CC and more.

You’ll have the opportunity to pick up Volume III at the Brass Monkey gig, and have it signed.

Hope to see you there!