There are two main types of bass instruments:

The upright bass and bass guitar are used in many genres of music, and are usually tuned to the same notes: E1, A1, D2, and G2.

Upright basses, sometimes referred to as a ‘double bass’, can be either acoustic (unplugged) or electric.

The upright bass is quite an old instrument, and is more common to orchestras, ensembles, and jazz groups than in pop and rock bands.

This striking looking instrument, which looks much like a large cello, can be played using a bow (arco), or by plucking (pizzicato). The upright bass has no fret boards, and has four, sometimes five, strings.

The electric upright bass was invented in the 1930s. These are smaller and easier to transport than the acoustic upright bass. In addition, the design and materials are optimised for electric amplification. 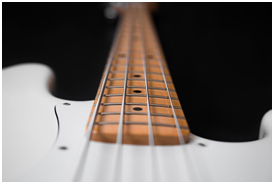 Just like the electric upright bass, the bass guitar was invented in the 1930s by Paur Tutmarc. In the 1950s, Leo Fender began to sell the bass guitar to the mass market.

Bass instruments are essential to most musical compositions. If you’d like to learn a bass instrument, don’t hesitate to get in contact. We’d be more than happy to answer any questions you might have. Call on 02 9602 9774, or fill out the form on this page.